I promised to give y’all a sneak Halloween preview and I think this little episode sums up the dark and light and frivolity of The One Rule of Magic. The novel is out now, a Halloween release, and expect to see a couple of reviews in the future from a couple of stout yeomen who agreed to put aside some time for it. (If you want to review it after reading this, let me know; there’s a free voucher code for Smashwords to the swift footed amongst you.)

In this section, Frieda Schoenhofer, believed by her parents to be dead, is in Prague where she has met Tomas Druba, a ventriloquist who adds the voices to puppets created by his wife Natasha. With time to kill, Frieda finds herself in the puppet theatre and decides to use her magic for a bit of nocturnal entertainment…

A short flight of steps led from the wings to the workshop. In the void, abandoned and unlit, I could smell the wood of the waiting puppets and sense their dormant outlines. What if they were to come alive and give me a private performance? Exclusive for one night only. The recollection of an old spell used to animate the inanimate and a moment’s thought to chant the words, roused their little joints until I could hear the gentle sound of wood against wood and bodies stood upright on eager legs and feet. Clothes were flattened and brushed down, collars turned up and hats straightened. The puppets gathered in an orderly crowd and headed towards the steps. Couples walked hand in hand, servants accompanied their masters and mistresses, and a priest ambled among his flock, hands joined in prayer with his long fingers almost disappearing up his nostrils. After a moment only the old man I had seen earlier remained in his chair, fast asleep, unaffected by the spell; special in some way as if the puppeteers had imbued the wood with some magical potion to make him resistant to witchcraft.

I returned to the stage and waited for the cast to join me. The clicking of feet and the crumple of fabric descended the steps. They hesitated. (Stage fright? They had no puppeteers to rely on. . . .) And then a nervous voice spoke: “Who is she?”

“She’s the judge. The judge has arrived.”

Two red cheeked soldiers in black uniforms and big hob nailed boots emerged from the gloomy background and jiggled onto the stage. One of them coughed. “Shall we let the crowds in, M’lud?”

They waited for an answer. I felt embarrassed to be speaking to them. “Crowds?”

“Plzen,” the other one said. “We can tell them to leave the goats outside.”

“Okay. Leave the goats outside and they can come in.”

The first soldier turned his shoulders and jiggled again. “Let ’em in. But no livestock.”

The stage began to fill with every shape, size and form of wooden life I could imagine, and probably a few I couldn’t imagine. Trotting and clopping, jumping and dancing on little feet, their assorted heads bobbing and wobbling, they mumbled and muttered and as the numbers grew the sound became a raucous tumult. The rabble pushed and shoved and assembled in the confined space of the stage, leaving just enough room in front of me. Satisfied they were in position, they acknowledged me with nods and M’luds and how-do-you-dos and never once questioned my height, my dress sense or fleshy organic appearance.

The spectacle, the success of the spell, forced me to laugh. The puppets laughed . . . out of politeness, I think. I was surrounded by accountants carrying books, spectacled old ladies in aprons and clogs, butchers carrying sides of ham and bloody meat cleavers, a couple of violin players guarding their little instruments, a pilot with goggles perched on the top of his head, and a black faced chimney sweep whose brush hung over his shoulder and tickled the chin of a nobleman’s wife. She sneezed, her husband offered her a silk handkerchief and admonished the chimney sweep who swung around and knocked the mitre off a bishop’s head.

An argument broke out and the soldiers tried to intervene. “He knocked my hat off.”

“I couldn’t help it. It was these two. Lord and Lady Mindyermanners.”

“You nearly poked my wife’s eye out.”

“She shouldn’t stand so close to me, should she?”

“Oi, show some respect in front of the judge,” the soldier shouted and everyone calmed down. What followed was the kind of embarrassed silence that only happened in human company. (Or so I thought.) The puppets waited for events to proceed. I waited with them, ignoring the self-conscious coughs and glances towards the empty auditorium.

The crowd erupted, booing and hissing, arms raised, fists formed. A small wooden pitchfork appeared above the yelling heads, and a man dressed in a postman’s coat and hat was dragged into the space in front of me by two more tubby soldiers.

“He pinched my paying-in book, the swine.”

I was called into play again when a barrister wearing a dusty grey horsehair wig and ominous black gown stepped forward. “The accused, Josef Yurtalink, has ransacked the town’s post and abused his position of trust by steaming open the envelopes and reading everyone’s letters.”

“Then how do you brew your tea?” The crowd behind the barrister shouted, ‘answer that.’

“Ask him to walk in a straight line.”

“Wait, wait,” I called for calm. In the silence someone mumbled ‘chop his legs off.’ “No one is going to have their legs chopped off.” Disappointment rippled through the crowd. “Justice must be seen to be delivered.”

“Scurrilous lies, M’lud. It’s a vendetta to tarnish my name and have me sacked.”

The crowd didn’t agree. I raised my hand to shut them up. “Who’s making these accusations? Can you name them?”

“The bare faced cheek of him.”

“Stop going on about his legs.”

“Well he can’t deliver the post if he’s got no legs, can he?” 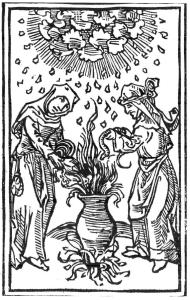 My intervention was needed again and I began to worry I might soon lose control of the proceedings. “Is Pietr Zgorda here to defend himself against the counter-accusation?”

The crowd shuffled about. A man wearing a long red coat, and two identical twin girls with enormous freckles, moved aside as an old man stepped forward. His jutting chin appeared first followed by a face with hollow cheekbones and his head topped off with a stovepipe hat. Dressed head to foot in black and with his leather bag he was either a doctor or an undertaker.

“Are you Pietr Zgorda?” I said.

“And have you been spreading rumours about Mister Yurtalink?”

“What do you do for a living Mister Zgorda?”

“I run a telephone and wireless business.”

His answer took me by surprise. I suppose his outfit was contemporary with early telephone technology, but standing in front of a medieval princess threw me a little. “Is it in your interests to see the postal service go out of business, Mister Zgorda?”

He twitched, hopped about with discomfort and tried to avoid answering.

“If you rubbish Mister Yurtalink’s character and lose him his job, there’ll be no postman, no postal service and everyone will have to communicate by telephone. Won’t they, Mister Zgorda?”

“And if the telephone is the only means of communication you’ll have a monopoly and be able to increase your prices.”

“He already charges too much.”

“Chop his legs off as well.”

“That won’t stop him listening in, will it?”

“Chop his ears off then.”

The makeshift courtroom erupted again, with defenders and accusers yelling for both sides. I waved my arms and a hush fell on the proceedings. “I have a decision. Mister Yurtalink is free to go. . . . ” Before I could finish the crowd went berserk and the man who was initially threatened with the loss of his legs was carried off shoulder high. Mister Zgorda was also engulfed; disappearing into the crowd which closed around him until he was swept away. Justice served, correctly I hoped, I found myself alone on the stage.

“Bravo.” A single voice spoke from the auditorium. I blinked and recognised the old man from the workshop.

“Oh, hello. Sorry, when I saw you in the workshop I thought you were one of the puppets.”

“You’re not the first to make that mistake. I’m Milan. I’m the caretaker here when the others go home.”

A feeling of embarrassment came over me. Not because I mistook him for a puppet, but because he had sat through my private performance.

“I’ve never seen that done before. It was quite impressive.”

“One or two. You don’t sound too surprised to have seen any of that.”

“Puppets running around all by themselves?” Milan relaxed in his seat and crossed his legs. “You see all sorts of things in here when the place is empty. Last month, for example, they all got together to discuss wages.”

“Wages? The puppets are paid wages?”

“A puppet’s gotta eat,” Milan said. He grinned at me. Rob Wallet wasn’t the only one who could catch me out. “Why the trial?”

“I didn’t plan that. It just sort of happened.”

“Must be a subconscious thing. Do you try people in real life? Do you hold judgement over others?”

“The power of life and death? Come on, your secret’s safe with me.”

“I don’t have the power of life and death, no.” I did once. I suppose I still had, but I was lying to myself denying it.

Milan wasn’t convinced. “Well, they seemed to respect you. Maybe it’s because you’re twice as tall as them.”

“I guess I’m not supposed to be here.”

“No, you’re not. It might be a good idea for you to leave before they come back.” Milan approached the stage and took my hand to help me down. He walked slowly and carefully out of the auditorium and through the lobby to the theatre entrance. “Don’t make a habit of it. They have to be up early in the morning.” He opened the doors. “You think it’s unusual I don’t find any of this strange? You of all people?”

I suppose he was right. After the events in Rotterdam and my previous life of spells and broomsticks, my surreal world had become second nature, tricking me into believing it to be unique. But it wasn’t. There were others like me, thousands, possibly millions. “I see your point.”

Milan smiled from the other side of the doors and returned to the darkness of the theatre.

The One Rule of Magic is available from Smashwords, Amazon, Barnes & Noble, Apple and all online ebook retailers.

4 thoughts on “Extract From The One Rule of Magic”