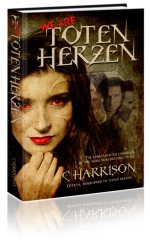 The first book of the Totenseries and where the whole unbelievable saga kicks off.

Between 1973 and 1976 Toten Herzen sold over eight million albums and toured the arenas of Europe and the US. In 1977 all four members of the band were murdered by crazed fan Lenny Harper. Harper was only charged with wasting police time and the bodies disappeared.

Thirty five years later, British music journalist Rob Wallet’s investigation into the incidents of 1977 led him to discover the band still alive in a remote village in southern Germany.

He persuaded them to make a comeback.

The paranormal dark comedy We Are Toten Herzen is the authorised story of one music journalist’s ambition to bring Toten Herzen back from the dead. From an isolated Dutch farmhouse to the teeming chaos of New York, via Suffolk and the Ahoy Arena in Rotterdam, fact and fiction blur as the ’70s most notorious rock band plan their return, outwitting the modern music industry and settling old scores in the only way they know how.

But is Wallet’s story a hoax or strange reality? As he uncovers more of the band’s past new questions begin to emerge. Was lead guitarist Susan Bekker hospitalised in 1974 with Rabies? Was the band’s first manager Micky Redwall killed by his own dogs in 1977? What happened to an original ‘fifth member’ of the band Peter Miles? And after all this time why haven’t Susan Bekker, singer Dee Vincent, bassist Elaine Daley and drummer Rene van Voors grown old? Find out in the only official account of Toten Herzen’s long awaited reappearance.

Available in ebook format from the following.