Back in 2001 France was represented at Eurovision by a Canadian singer called Natasha St. Pier. If Celine Dion could lift the roof off an arena, St. Pier could carry it into outer space! She had a phenomenal voice and in numerous interviews I came across online I noticed a common question coming up:

How does it feel to be compared to Lara Fabian?

Well, there’s only so much teasing you can put up with before you give in and I went on a hunt. Who was this Lara Fabian?

Back in the day, Youtube was in its infancy (still in the womb to be exact, it didn’t appear until 2005), broadband was something only NASA could afford to use and downloading MP3s was at best dodgy, at worst illegal. It wasn’t easy to find Lara Fabian, but when I did. . !

The first song I ever heard was Adagio and the key change half way through what some might call the middle 8 was unholy. Lara Fabian had a voice that wasn’t just powerful it was controlled power, subtle power, not off-the-leash howling like some female singers, but from the diaphragm power. If Dion’s limit was the roof and St. Pier’s outer space, Fabian transcended the known universe!

Back then (in the day) you had to wait a long time to hear a foreign song. In Britain the music media prefers its foreign language artists to stay over there, unless they release a novelty summertime hit that reinforces the collective xenophobia. I can remember someone in the Lara Fabian fanclub uploading one video at a time, for a limited period, and you then had to hope the dial-up connection didn’t time out before the video file finished downloading. (You’d never get another chance.) 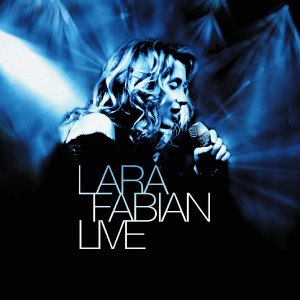 I found Lara Fabian during a golden period in her career. Songwriting with Rick Allison and accompanied by musical craftsmen like Pierre Grimard. She could do no wrong. Now she continues to hypnotise her army of fans, continues to switch effortlessly between soprano and pop-rock vocals, continues to keep a lid on a voice that could possibly destroy worlds if it was channelled for villainous puposes.

Luckily for us we have nothing to be afraid of. Lara Fabian’s voice is possibly the finest in the world.